A little history
The beginnings of the event date back to 1927, when a modest flower procession was organized by the Congress of Workers’ Gardens of Alsace to promote the market gardening tradition of the region. Faced with the success of the procession, the mayor of Sélestat Auguste Bronner officially organized the first flower parade in 1929, which allowed Sélestat to be part of the tradition of local popular festivals. 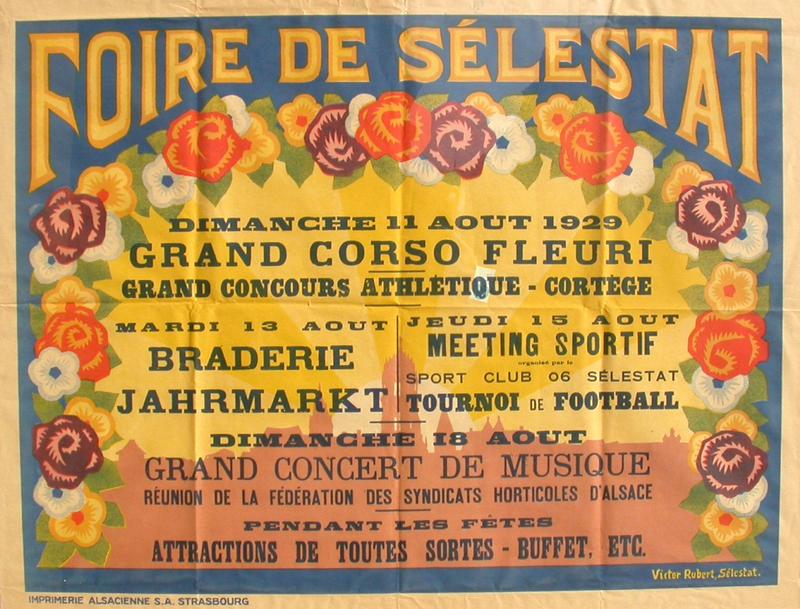 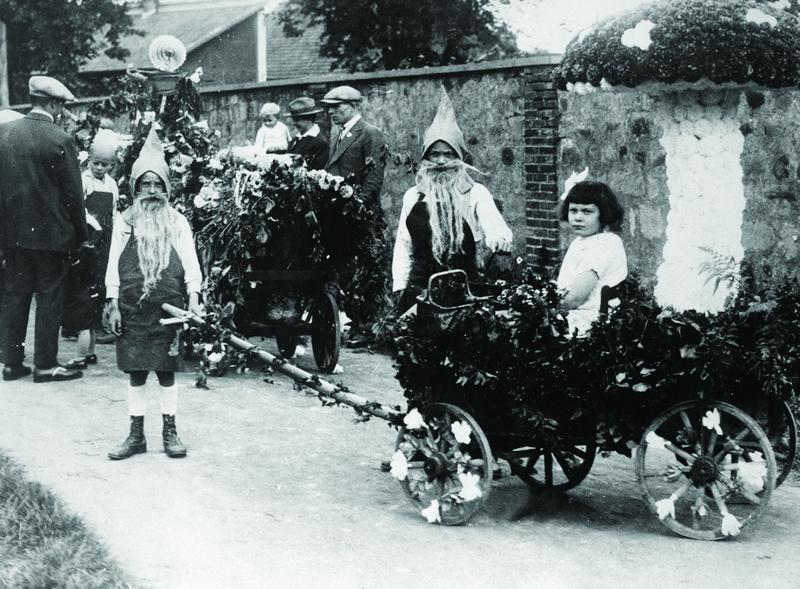 In addition, the city has a dahlia culture deeply rooted in its history. The dahlia, a flower native to Latin America, has made the reputation of the flower parade of Sélestat since 1929, and one of the best known in the Grand Est. 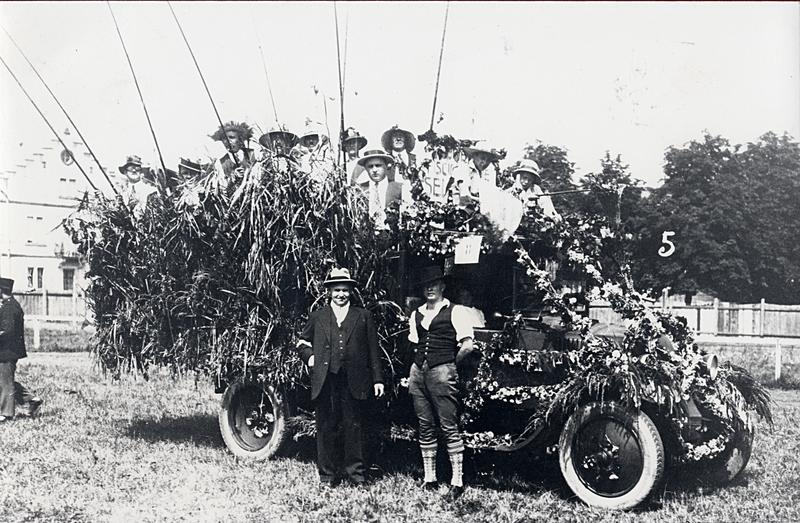 In the 1930s, the automobile and the bicycle were given pride of place during the first parades.
The “floral cars” travel through the city, adorned with flowers, accompanied by music and advertising for local brands. Added to this is a glorification of the French colonial Empire, as well as the old trade corporations, dating from the Old Regime, of which the current “companions of duty” are a legacy. The success of the flower parade quickly gained momentum. 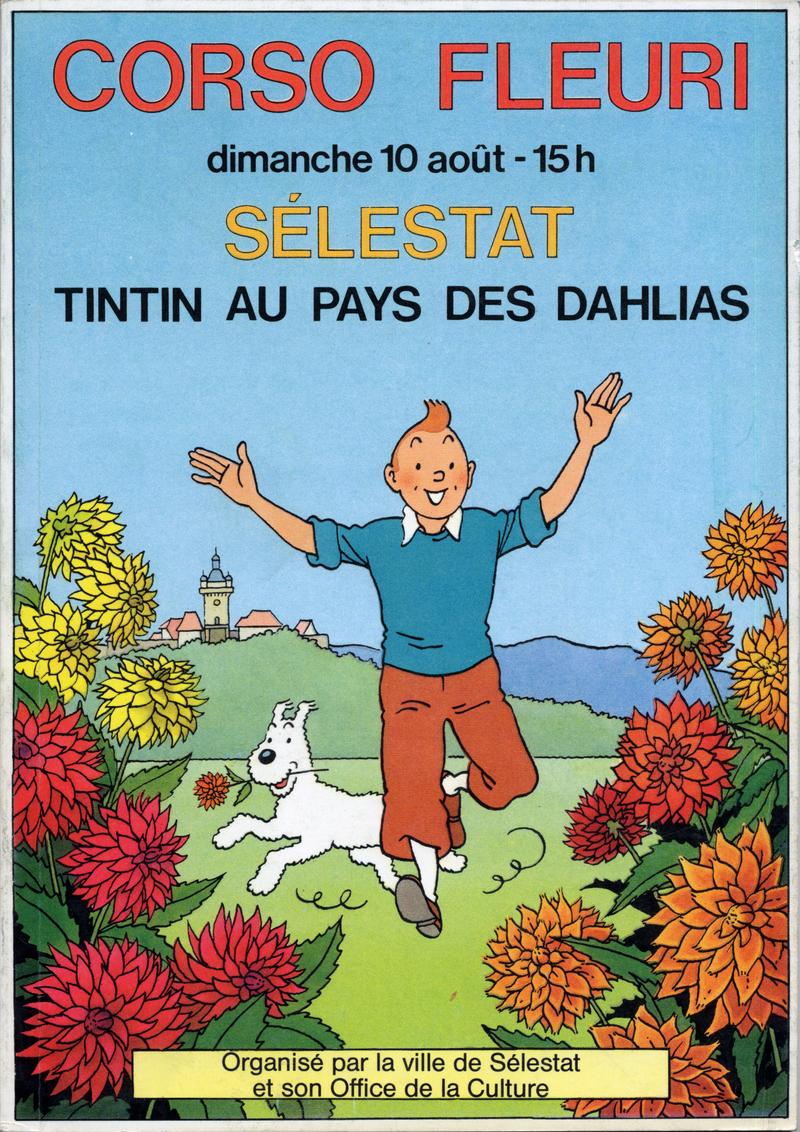 From 1954, the flower corso became thematic, with the first theme “fairy tales”. Each year, tank designers are invited to enrich this theme in an original way. In addition, from 1960, the flower parade continued after 10 p.m. and offered a nocturnal parade. Some themes particularly mark the spirits, in particular the year 1978 and its “world tour”, or the year 1986 and its homage to the character of Hergé, Tintin, under the name “Tintin in the land of the dahlias”.

Four months of work are needed to organize the flower parade. The floats are first imagined by artists, whose plans are then used by the workers of the city for their realization. The structures are made of metal or wood. Then, the floats are lit a week before the festivities, by adding light cables for the night parade. Finally, on Friday night, nearly 500,000 dahlias allow the floats to be paraded on Saturday from 6 p.m., in front of an audience of nearly 25,000 people.

The festivities last all weekend. In addition to the parade, there are concerts, folklore and taste events such as the Sélestat wine fair. A fireworks display closes the corso on Saturday evening at midnight, the visual design of which is adapted to the annual theme. Sunday is dedicated to the continuation of the festivities, in particular the exhibition of floats in the open air, as well as – a remarkable fact – the enthronement of the new members of the brotherhood of the Zewwelatreppler, or “onion tramplers” created in 1964, in tribute to the market gardening tradition of the city. 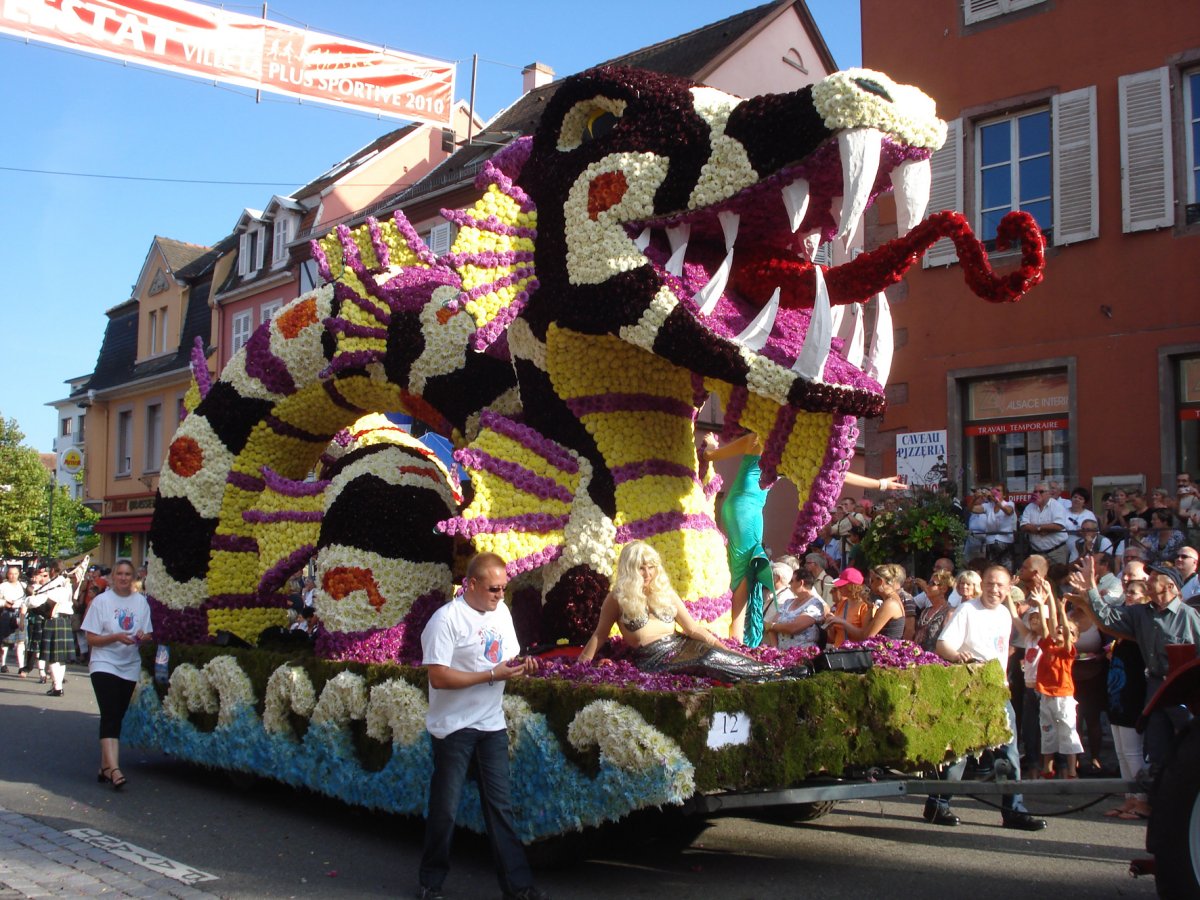 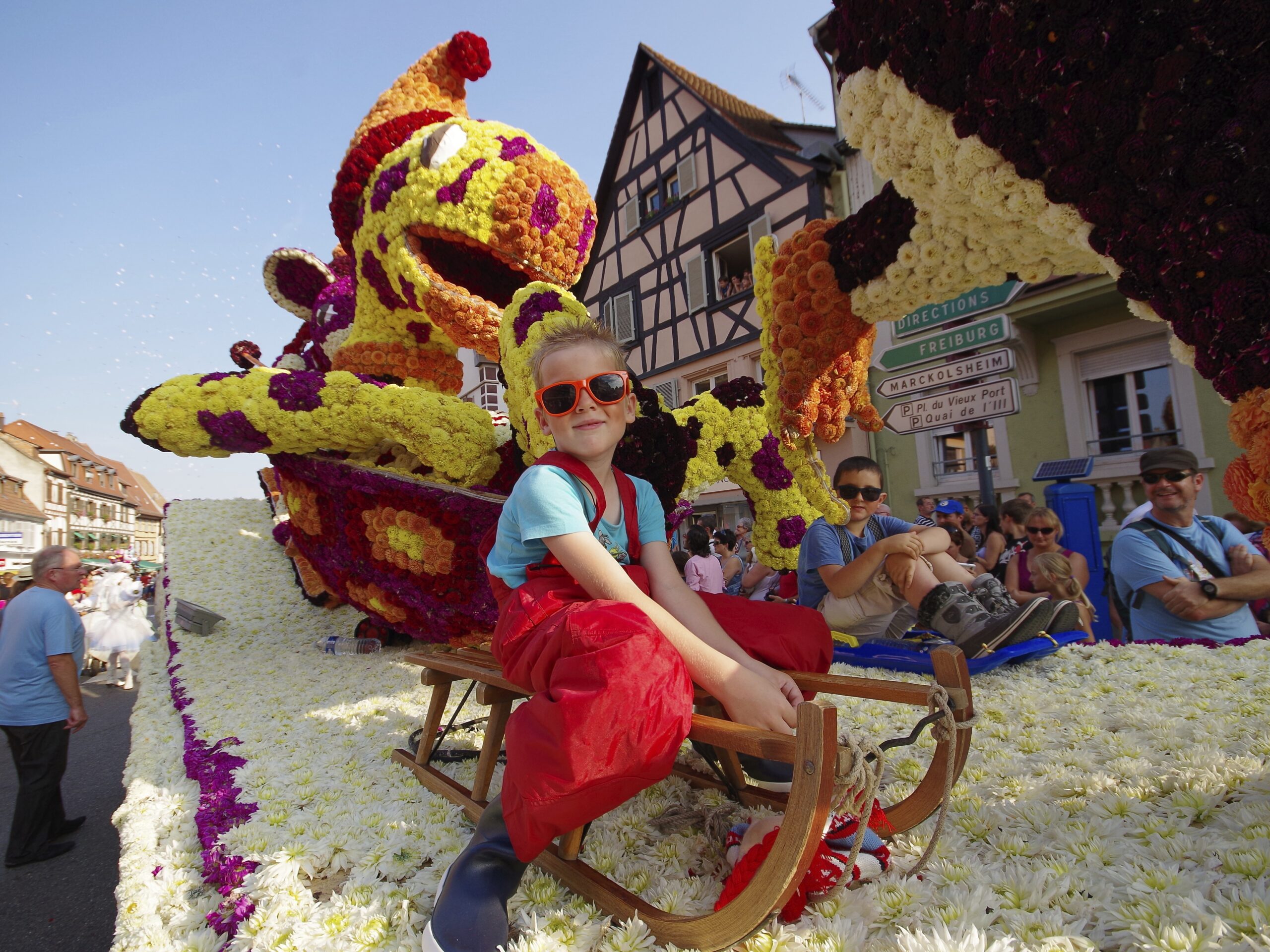 After a 2-year hiatus, the Corso Fleuri, which is celebrating its 93rd anniversary, is making a comeback in 2022.

With its twelve flowery floats, this flagship event of the City of Sélestat will take you on a walk combining nature and nods to Europe, the theme of the City for this year 2022. From Nordic forests to European legends, customs and traditions, the public will be led to let themselves be carried away on this colorful journey.

Many festive activities await you in the city center: musical, folkloric and ambulatory events, children’s square… 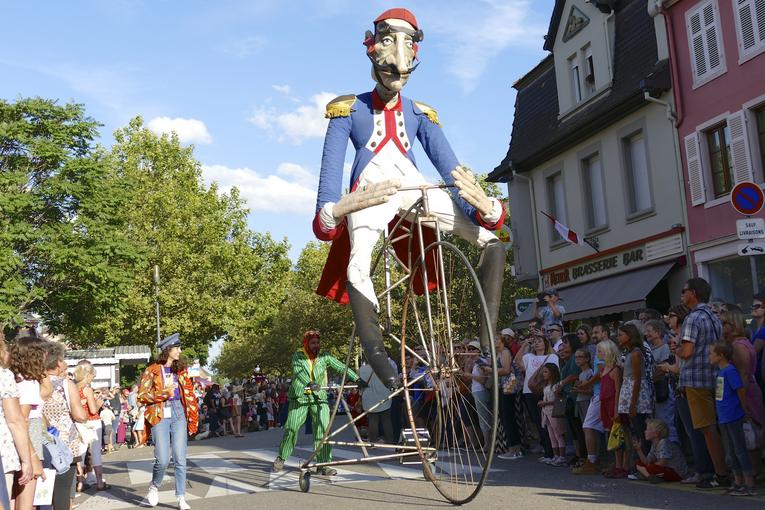 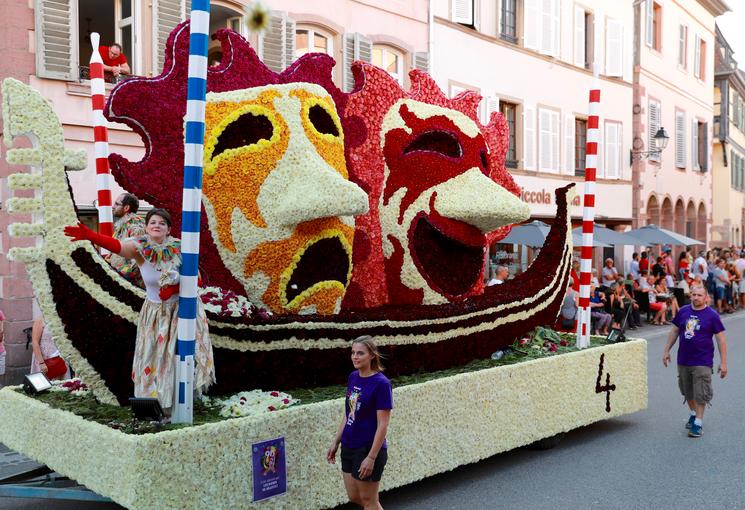 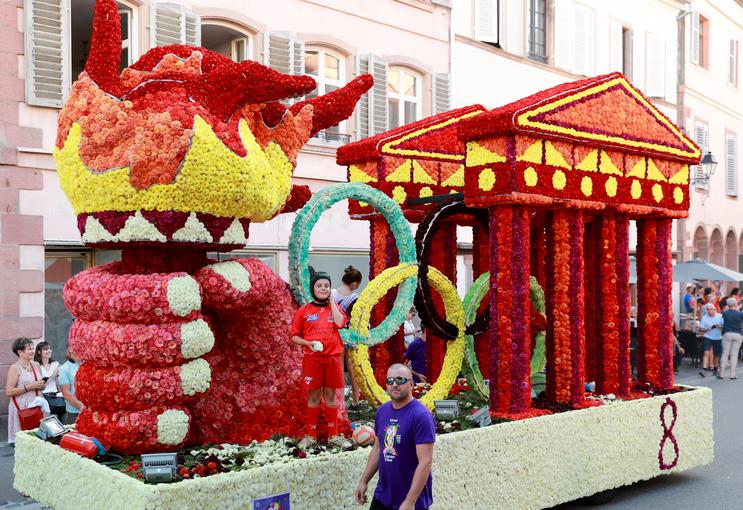 On Saturday August 13 , we invite you to share this highlight of the Selestadian summer:

With the Corso free, Sunday August 14 will prolong the celebration more modestly with the exhibition of the 12 floats, the Wine Fair, folkloric events on the Place de la Victoire, or the enthronement of new members of the brotherhood of Zewwelatreppler.

Free access
Seat in the grandstand: €20 for the 2 processions, €12 for a single procession
Presale of seats in the stands: Sélestat Haut-Koenigsbourg Tourisme on 03 88 58 87 20 until Saturday August 10 at 3 p.m. (within the limit of available stock).