The City of the Train

Mulhouse – The City of the Train (Railway Museum)
The city of the train, formerly called the railway museum, is located in Mulhouse. This museum houses, in two large halls, a very fine collection devoted to the history of the railway. You will be able to discover locomotives and wagons from the 19th and 20th centuries, superbly staged. A classic to discover, accessible to all audiences, simply curious or passionate about old locomotives. 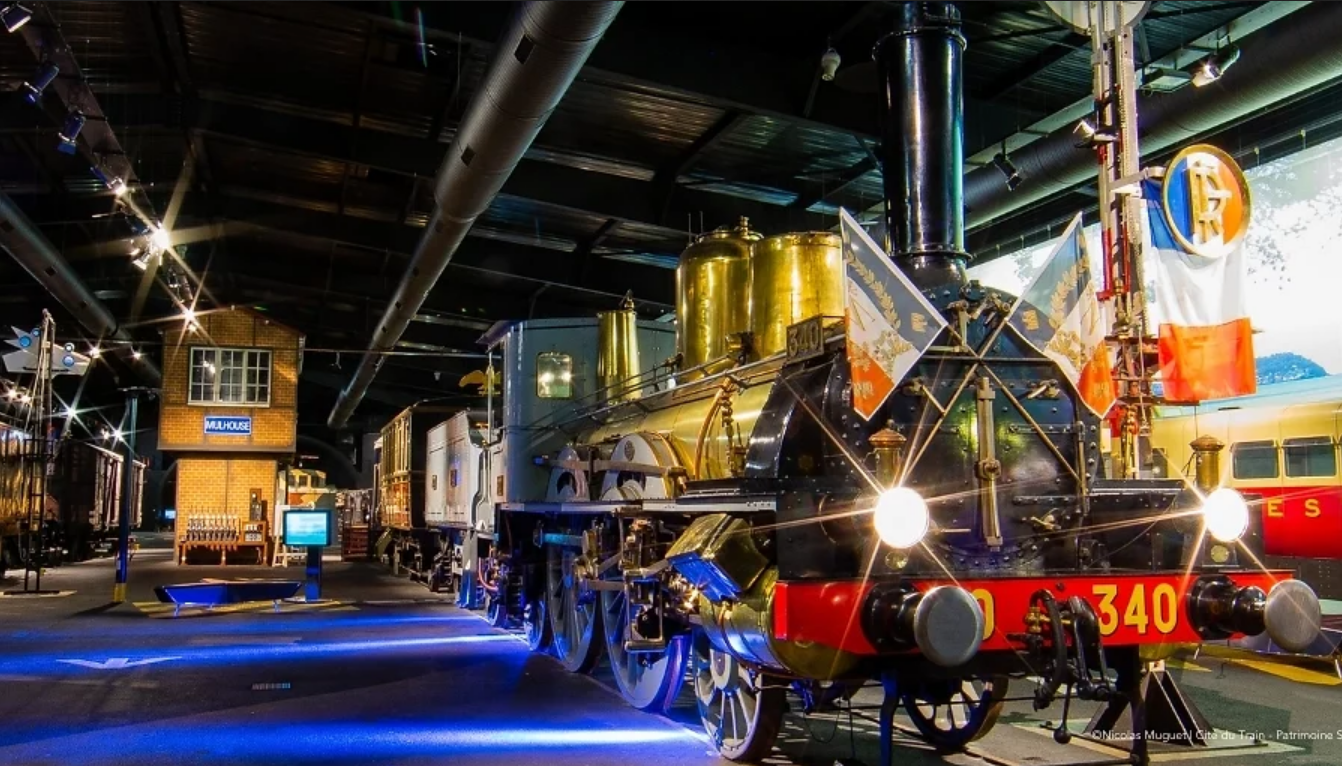 To visit and see at the Cité du Train
Theidea of a museum dedicated to railroads was born at the beginning of the 20th century, but it was not completed in its first version until 1971 and then housed steam locomotives. It then expanded with the construction of new buildings. The museum is undergoing a makeover before reopening in 2005.

The first hall
This hall is entirely scripted and organized by theme, along a signposted route. You will be able to discover themes as varied as that of the railway and holidays. This theme presents a Micheline, mounted on tires. It is a model designed by André Michelin who had not been able to sleep during a trip, bothered by the noise of the wheels on the rails! 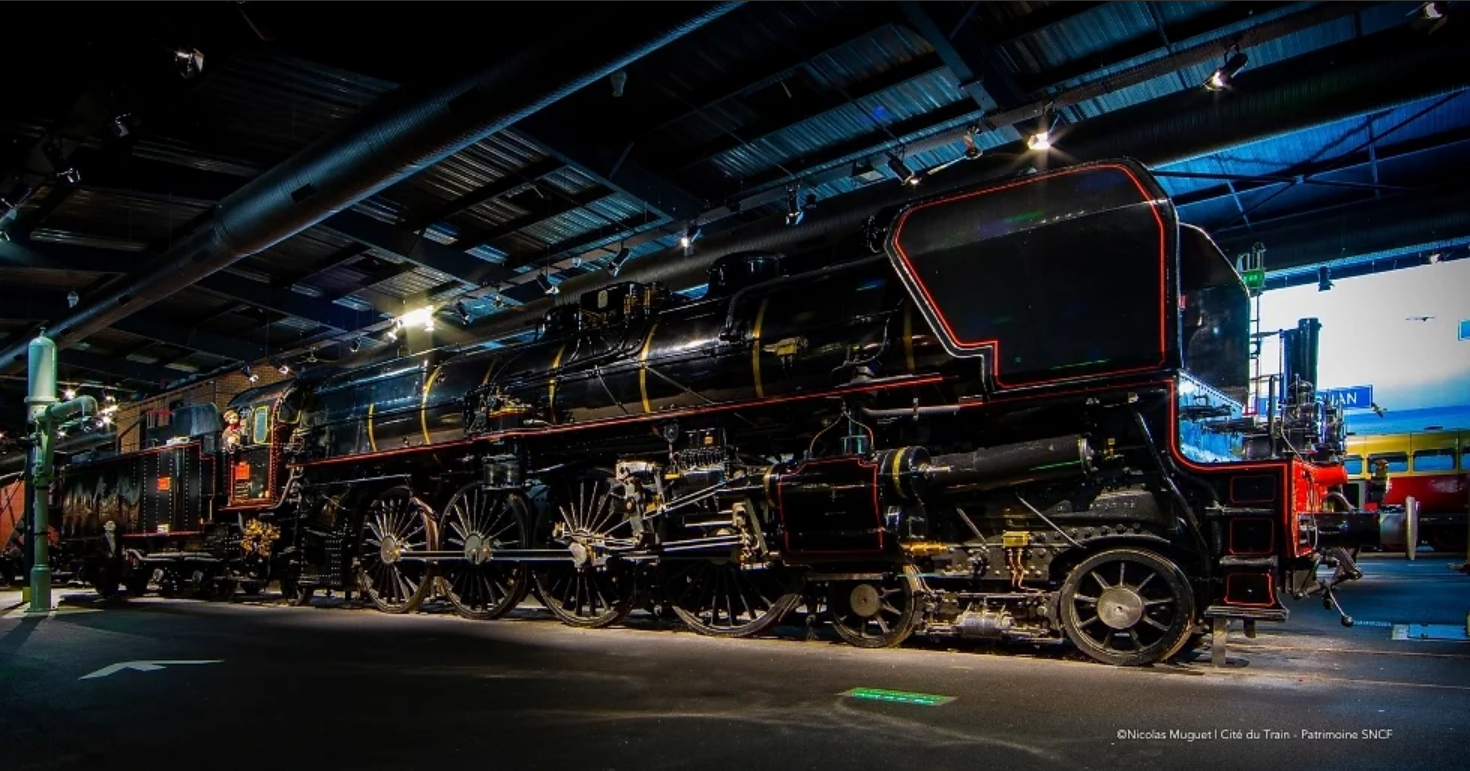 The mountain railway features a steam locomotive equipped with a snowplow system. Snow plow train Further on, the theme of trains during wars is approached, with their multiple roles (troop transport, guns on trains and the importance of sabotage). Interesting historical videos complete the explanations. 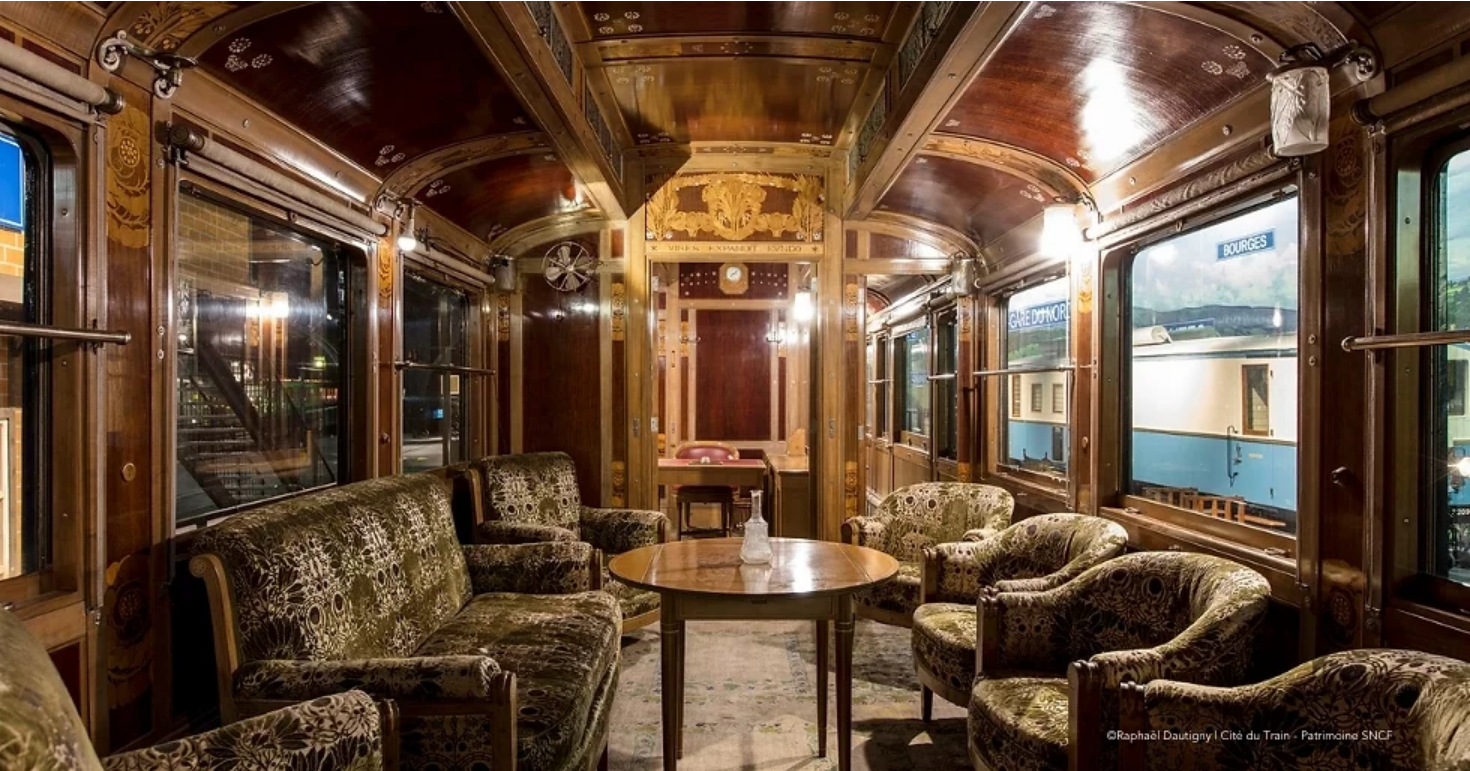 You will also discover luxury trains, whether official trains (Napoleon III and presidential) but also the famous luxury travel trains with the Pullman wagons of the Simplon-Orient-Express line. 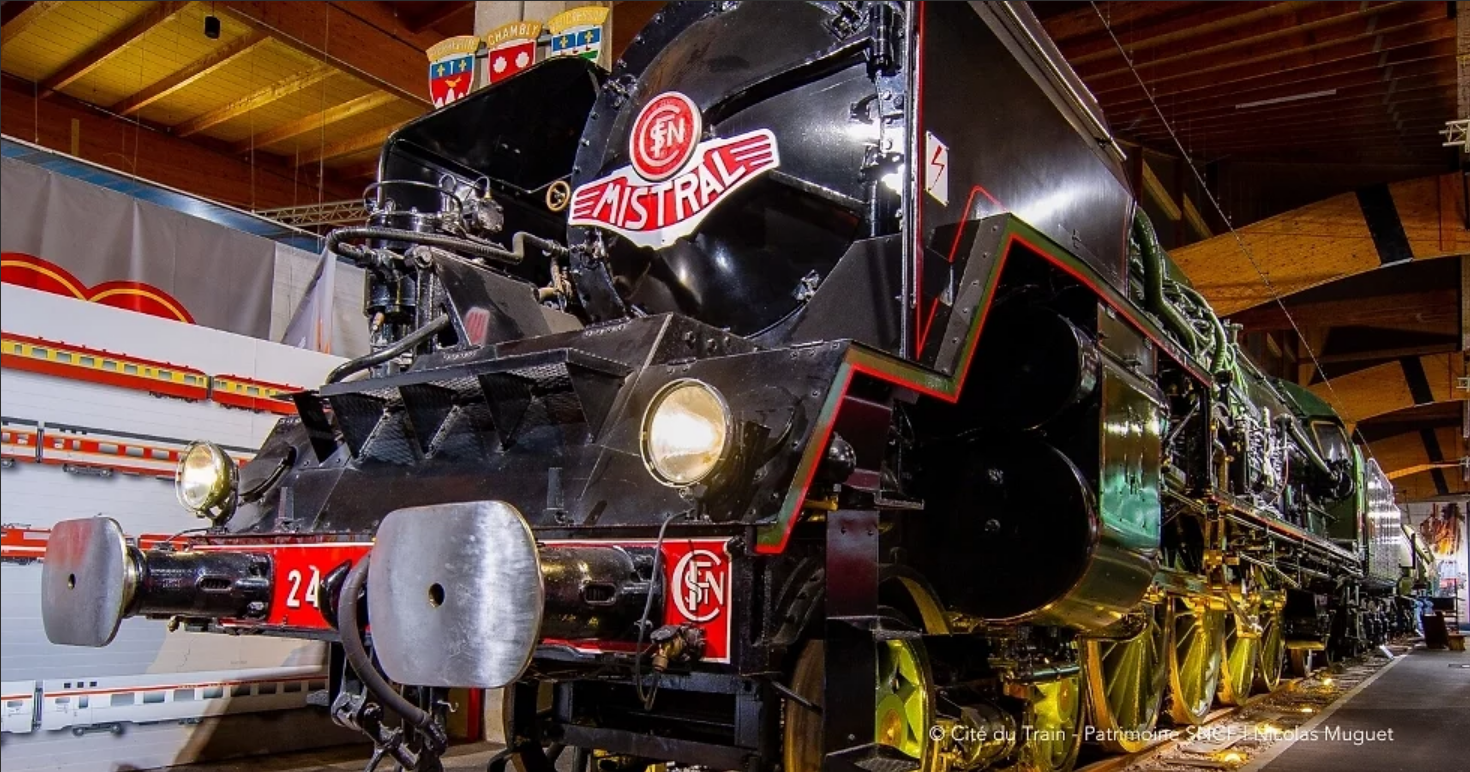 Finally you can see more popular trains including an old metro, including displays, advertisements but also period luggage. 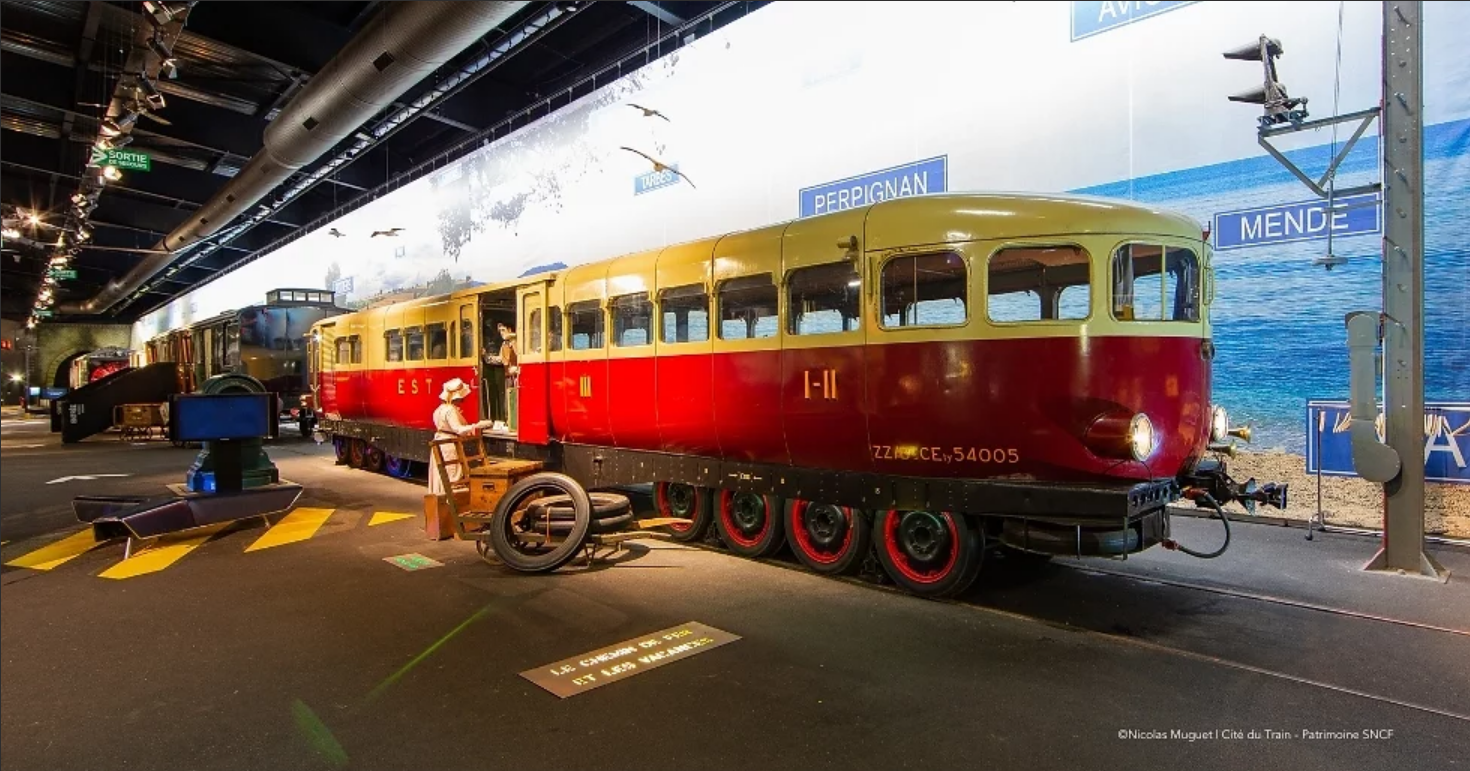 To animate this route you will enjoy a part of a staging (reconstruction around the train, trolleys, switch station) but also videos dealing with these different subjects. These short videos are very interesting.

The second hall
The second hall of the city of the train has for theme the railway adventure. It exhibits a very fine collection of locomotives and wagons. This part is not scripted but audio guides are available. For example, you will discover the Saint Pierre Buddicom locomotive, the oldest in the museum, dating from 1844, which made the Paris-Rouen connection. Further on, the Pacific Chapelon, from the Compagnie du Nord, which was capable of reaching 130 km/h, a feat for the time! Its chocolate color was that of the company. The PR1 and PR2 presidential cars from 1925 and 1934 were used by heads of state. The difference in style is interesting, the PR2 decorated in the 50s style while the PR1 is in art deco. You can also discover a former speed record holder, with 196 km/h, reached in 1937 by the Bugatti railcar, equipped with 4 Bugatti Royale engines. 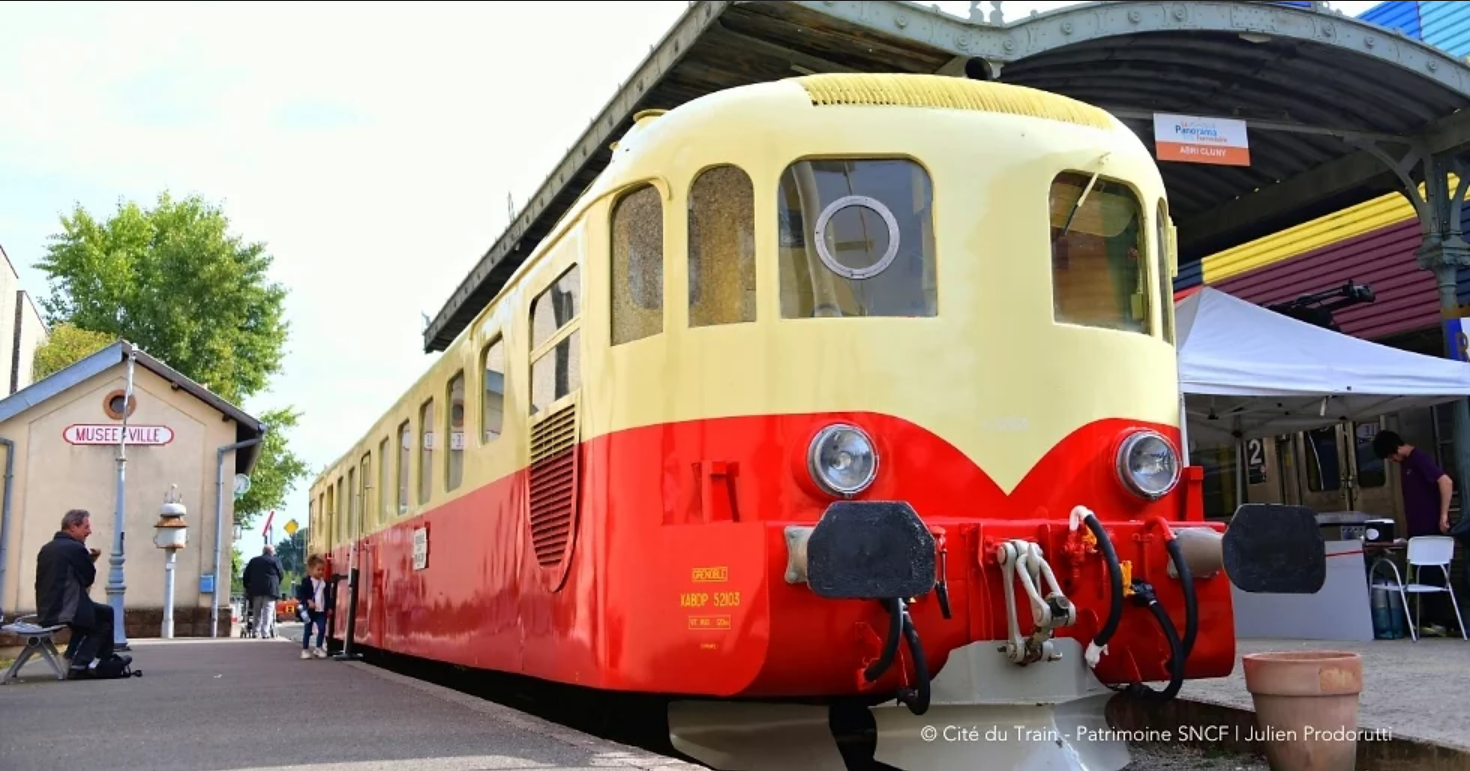 In one room, a large model train circuit is on display.

The Outdoor Space
The Cité du Train offers you, in addition to its two covered halls, a 16,000 m2 outdoor area with permanent and temporary exhibitions, as well as many fun railway activities for the whole family.

This space is divided into three sectors: the Quai de Cluny, the technical space and the temporary exhibition routes.
You will also be able to take advantage of the passage of modern trains such as the TGV, the international Intercités, the Corail TER Alsace 200, the various TER equipment, the Freight trains, the SNCF tram-trains and the Soléa trams of the Mulhouse network.
Two tracks flanking the “marquise” of Cluny station accommodate railway equipment for temporary exhibitions. A small station from the beginning of the 20th century recreates the atmosphere of a bygone era, further illustrated by a Lartigue mechanical signal, an imposing station crane, various railway objects and the Paris Invalides signal box. 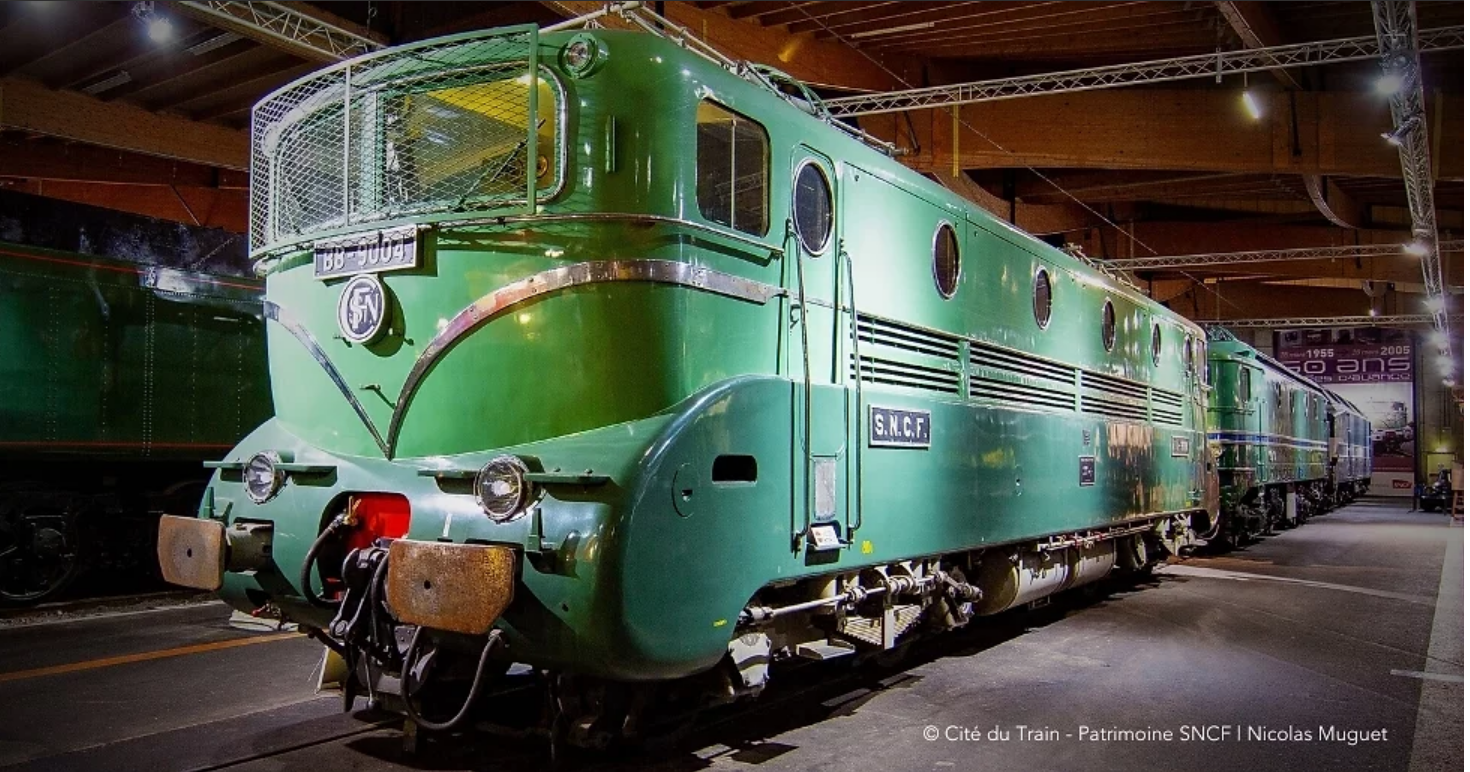 The secure technical area offers various railway activities. A track plan, on the edge of the Panorama Ferroviaire, makes it possible to organize temporary exhibitions of equipment, from April to October, with the presentation of some elements parked in the reserve building of the Cité du Train. Copyright